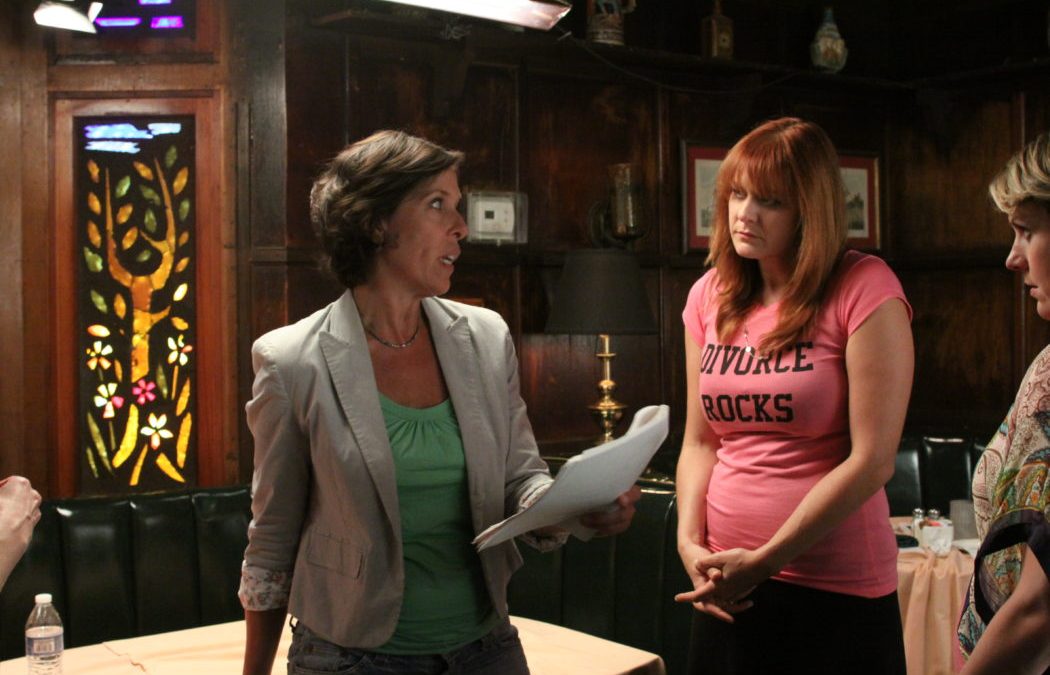 Aging Out: Hollywood’s Problem With Women Over 40

My friend Jenica Bergere is on the cusp. Jenica is pregnant with her second child, and at six months in, she laughs because she looks as if she’s at nine months and ready to pop. At 39, she’s glowing and lovely in her typical rocker-mama outfits, with her vivid red hair and sparkling blue eyes.

Jenica’s the star of my short film Ending Up. With nearly a hundred acting credits on her résumé, she’s a pro whose comedic edge and vulnerability shine through on screen. Yet, at age 39, she calls herself “the almost girl” and feels a huge amount of pressure looming over her.

“In television and film, you have a certain amount of time to market and brand yourself,” says Jenica. “If you don’t “hit it” — if you don’t get it right by being a star of a TV show or a film by the time you’re 40 — then when the clock strikes 41, supposedly, you can forget about being successful. You’re put out to pasture, and then you can come back when you’re Betty White.”

Jenica feels so much pressure to “hit it,” in fact, that she delayed becoming pregnant with her second baby for several years. She and her husband, chef Josh Jackson, also have a 9-year-old daughter.

“I have been told throughout my career, by various representatives, that there is a window,” says Jenica. “That as you age, there are fewer opportunities and pretty soon your window shuts.”

Part of the problem is that few leading roles are written for women over 40, especially in film. Typically, in movies, women in their 40s and up are someone’s mom or somebody’s wife in the background. Factor that in with committing the unthinkable sin of aging, and you have the perfect formula for actresses’ aging out of a very fickle and youth-obsessed business.

Risa Bramon Garcia, a director, casting director, and teacher, says, “The problem happens when writers and producers don’t see women as being sexual after 40 — by sexual I mean complex human beings who are attractive and appealing, vital and powerful, in their 40s and 50s and beyond.”

As a society, aging in general makes us uncomfortable. The camera magnifies our wrinkles and imperfections, and audiences don’t necessarily want the reminder of their aging selves reflected on the faces of their movie idols. Many actresses turn to plastic surgery or to hiding their age.

In 2011, then 40-year-old actress Junie Hoang filed a $1 million lawsuit against the Internet movie database IMDb for revealing her age. Hoang argued that she looked much younger than her years, and that IMDb’s posting her age would result in her losing film and TV jobs. In the end she lost her legal battle.

Unrealistically, Hollywood continually casts younger women in older roles… a 32-year-old chief of staff on a hospital show (KaDee Strickland on Private Practice), a 28-year-old mother of a 27-year-old son (Angelina Jolie and Colin Farrell in Alexander). In Hollywood’s mind, 45 is old, whereas 45 in real life — definitely in my circle of friends — is damn sexy. It’s an age of coming into one’s own. Sure, we have a few more wrinkles, but we also have a youthful strength and confidence that makes us hotter than we’ve ever been. We are not our grandmothers’ (or even our mothers’) generation. We live longer, work out, eat well, and there’s plenty of Botox to go around. Our age doesn’t define us. Rather, it refines us!

Actress Terry Walters says, “It’s a magnificent time, and I’m grateful to be aging and a woman. Negativity is imposed on me by the business, and I feel I have to keep my age a secret. I really hate that, because I don’t get to brag about how amazing I am at the age I’m at. And the shape I’m in! I feel like what’s hopeful is there’s gonna be a place for me again. Right now, I’m straddling two worlds.”

“We must stop listening to the notion that life is over after 40 for actresses,” says Garcia. “If a window is closing, just prop it up! We must embrace the change that happens in our lives at 40 and realize that we’re so much more interesting, and our voices are so much more engaging and powerful than they were ever before. We must claim who we are so that we can be seen differently by the people who are writing.”

Women writers and producers have a responsibility to create content by, for, and about women, and we, as audiences, need to get out and go see these films. It’s time to create Hollywood’s version of Lean In. Let’s hope that one day, Hollywood will reframe its idea of women in their 40s and 50s and allow us to be human, and wonderfully imperfect — as we really are.

Slowly, youth-obsessed Hollywood is changing. In recent years, there have been notable actresses who have become stars after age 40: Octavia Spencer skyrocketed to fame at age 41, in The Help; Anna Gunn landed the role of Skyler White on the hit show Breaking Bad at age 40; and Melissa Leo took home the Oscar at age 50 for her role in The Fighter and became a sought-after star.

As for Jenica, another pilot season had come and gone, and still no TV series. With her biological clock ticking almost as loudly as her actress clock, a defining moment finally came on a recent camping trip with a close friend. Jenica told her friend that she really wanted another baby, but thought she should wait and give it just one more pilot season.

To this her friend said, “For years I have watched you constantly putting so much into your career with little return. Your family is the only part of your life I see you put in, and get so much back.”

“The moment she said that,” says Jenica, “I realized that I no longer wanted to gamble with my ovaries. Every time I bet on my acting career, I ended up with a losing hand. Betting on my family was an investment that was worthy to me.”

A month ago, a very pregnant Jenica landed a great role in the upcoming feature film
All Stars. The director, Lance Kinsey, was so taken with Jenica’s audition that he re-wrote the script, making her character pregnant, so he could cast her in the role.

The way I see it, Jenica is holding all the cards. She is very successful in both her career and in her family life. Because when you bet on yourself by living life the way YOU want to live it, everything is possible.

this Article was originally published in Women’s Voices for Change.